If you’re not aware of the secret story writing formula, you don’t have to look further than the most recent Hollywood blockbuster movies.

Here’s the plot. In the first 15 minutes, our hero gets a dressing down by his mentor (Star Trek Into Darkness, Battleship). The villain gets caught … on purpose (The Dark Knight, The Avengers, Skyfall, Star Trek Into Darkness). Then 30 minutes before the movie ends, our hero has a moment of hopelessness only to succeed in the end (Olympus Has Fallen, Oblivion, 21 Jump Street, Fast & Furious 6).

Anyone of us who has thought about writing a novel, eBook or screenplay knows, coming up with original ideas can be tough.

But is there really a secret formula, a step-by-step guide, to writing the biggest Hollywood blockbusters?

Is it a closely guarded secret, limited to only a few of the richest directors, locked away in a wall safe at Universal Studios?

Well, no. You can buy the formula on Amazon, of course.

The not-so-secret formula comes in the form of a screenplay guidebook called Save the Cat! The Last Book on Screenwriting You’ll Ever Need by Blake Snyder.

When Snyder published the book in 2005, the effect on Hollywood was as if Bruce Willis really did set off a nuclear bomb from deep within an asteroid that was heading towards Earth.

Joseph Campbell possibly served as inspiration for Snyder, who developed the theory of the Monomyth that sees all mythic narratives as variations of a single great story.

This story pattern is found throughout many cultures, languages and time periods, even in the Bible itself. The pattern is often referred to as the hero’s journey, as Campbell first described it in The Hero with a Thousand Faces.

This infographic is the Monomyth. Start at the top and read counter-clockwise. 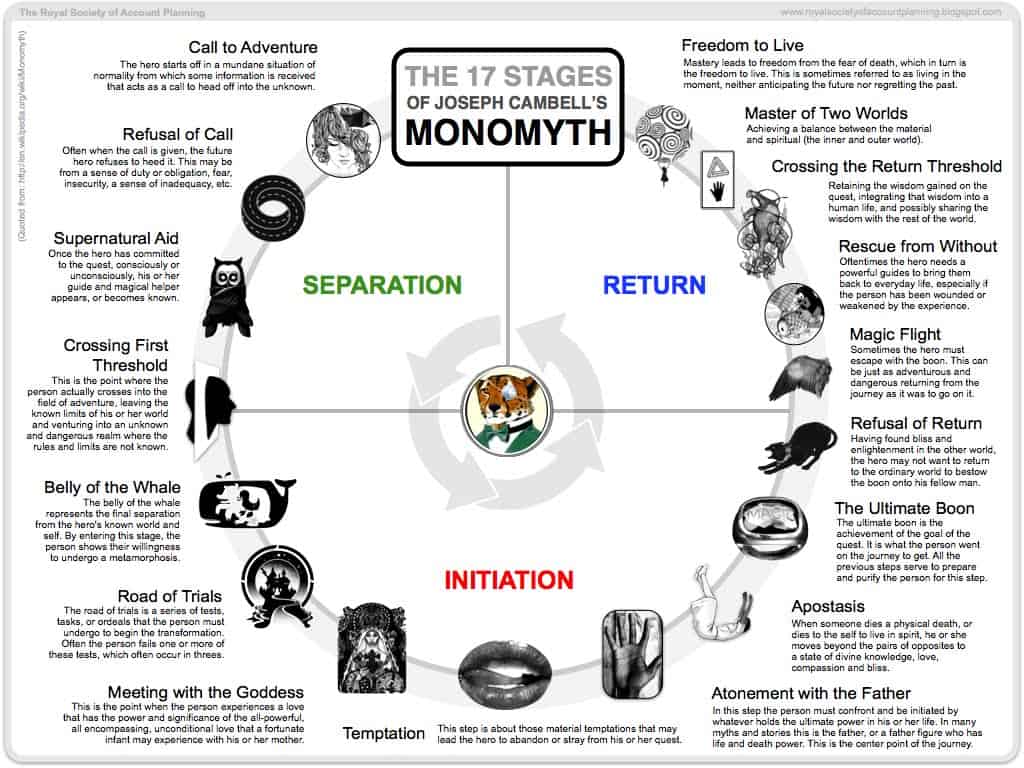 In Snyder’s book, 15 pivotal events need to occur within the story, called “beats”. He give these beats a name and even a screenplay page number. Since each page of a screenplay is expected to equal a minute of film, this makes Snyder’s guide essentially a minute-by-minute movie formula.

The page numbers don’t need to be followed strictly, especially when applying to formula to writing novels or short stories, but it’s important to get the proportions and distance between events fairly close.

Baz Luhrmann’s The Great Gatsby was apparently adapted to fit this formula. Star Wars, Die Hard, The Matrix, The Amazing Spider-Man, and The Avengers all follow something like the story path that Snyder laid out.

If you look close enough, you will find Snyder’s beats in the exact order, and almost by the minute, in virtually every major movie release in theaters today.

Monsters University hits every one of Snyder’s beats, including an opening image that is mirrored in the final scene, an act break when Mike and Sully reluctantly join forces to compete in the Scare Games, a false victory about three-quarters of the way through when they win the final Scare Games challenge, and an all-is-lost moment followed by an emotionally charged dark night of the soul next to a moonlit lake afterward.

Once you know the formula though, spending a few hours in the theatre will make you feel like Nostradamus. You’ll know what’s coming, even if you haven’t seen the movie before.

Save the Cat! The Last Book on Screenwriting You’ll Ever Need tells aspiring screenwriters to go for stories about young men, because that’s “the crowd that shows up for movies.”

This is why you’ll see a multitude of Hollywood movies about adolescent men coming to grips with who they are (ie John Carter, Battleship, The Bourne Legacy, Tron: Legacy, Abraham Lincoln: Vampire Hunter, every Marvel movie).

If you are writing stories, the beat sheet is very useful, even if you don’t plan to stick by it word-for-word. It will help order your thoughts and figure out what comes next.

It can make writing easier, but conversely, it can also stifle creativity.