From Disney’s Mickey Mouse to Pixar’s Buzz Lightyear, Disney movies have a quality of reassurance and feather-like touch to our hearts. Disney movie quotes offer words of encouragement to children and adults alike that serve as inspiration to follow our dreams and never give up.

For a moment, let’s put aside the fact that our beloved, wholesome Disney Corporation owns studios like Paramount Pictures who brought us the gore and violence of Pulp Fiction and The Godfather. 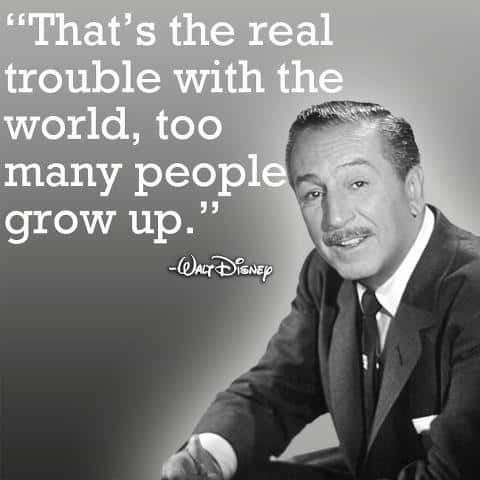 Let’s not scare our kids with the urban legend that Walt Disney himself is frozen in nitrogen, laying dormant in cryogenic suspended animation (pun intended) waiting to be resurrected.

It’s not true. Disney’s remains were cremated on December 17, 1966, and his ashes interred at the Forest Lawn Memorial Park in Glendale, California.

As a tribute to the magic and creations of Walt Disney, be inspired by some Disney movie quotes. Disney Games produces an award-winning portfolio of online virtual worlds for kids and families such as Club Penguin based on Disney’s beloved characters and stories.

Each month, tens of millions of unique visitors play one of their Disney virtual worlds in over 190 countries.

“A true hero isn’t measured by the size of his strength, but by the strength of his heart.”Hercules

“The past can hurt. But the way I see it, you can either run from it, or learn from it.”The Lion King

“If you keep on believing the dreams that you wish will come true.”Cinderella

“You are braver than you believe, stronger than you seem, and smarter than you think.”Disney movie quote

“You will never know unless you try.”Disney movie quote

“Some people care too much … I think it’s called love.”Winnie the Pooh

“Just because I cannot see it, doesn’t mean I can’t believe it.”A Nightmare Before Christmas

“Today is a good day to try.”Disney movie quote

“I’d rather die tomorrow than live a hundred years without you.”Pocahontas

“Like so many things, it is not what is outside, but what is inside that counts.”Disney movie quote

“I never look back, darling. It distracts me from the now.”The Incredibles

“Sometimes the smallest things take up the most room in your heart.”Winnie The Pooh

“The path to your destiny lies within the magic of your heart.”Disney movie quote

“The way to get started is to quit talking and begin doing.”Walt Disney

“The flower that blooms in adversity is the most rare and beautiful of all.”Disney movie quote

“Believe you can, then you will.”Disney movie quote

“All our dreams can come true if we have the courage to pursue them.”Walt Disney

“Happiness is a state of mind. It’s just according to the way you look at things.”Disney movie quote

“I give myself very good advice, but I very seldom follow it.”Alice In Wonderland

“When you got your pals, you got all you need.”Disney movie quote

“Always let your conscience be your guide.”Pinocchio

“Giving up is for rookies.”Hercules

“Life’s not a spectator sport. If watchin’ is all you’re gonna do, then you’re gonna watch your life go by without ya.”The Hunchback of Notre Dame

“A lie keeps growing and growing until it’s as plain as the nose on your face.”Pinocchio

“You’re never too old to wish upon a star.”Disney movie quotes

“A single grain of rice can tip the scale. One man may be the difference between victory and defeat.”Mulan

“In every job that must be done there is an element of fun.”Mary Poppins

Finally, if you’ve ever wondered what happens to Disney characters after the credits roll … well, they lived happily ever after! Don’t they?