In a recent study by the content network Outbrain, a sure-fire way to increase blog traffic is to avoid using pushy headlines.

An interesting trend emerged during the study, which analysed a sample of over 100,000 paid links, attempting to discover what headlines affect reader engagement. Outbrain noted that words that are overly pushy, salesy, or spammy had a negative effect on the headline click-through rate.

“The chart below illustrates the negative effect of headlines that directly address the reader or make use of demands.”

“The attempt to make readers feel as though they’re being spoken to directly appears to do more harm than good.”

Additionally, headlines that contain an imperative (“must” or “need”) also garnered 20% less clicks than titles that did not.

According to the study, it appears that readers prefer not to be directly referenced in blog headlines and don’t appreciate words that demand action or attention.

A separate study by Conductor discovered the same effects, as we discussed in 3 Simple Ways To Increase Headline Click-Through Rates.

In their study, “Reader Addressing” headlines performed 15% worse than “Number” headlines, as seen in this chart. 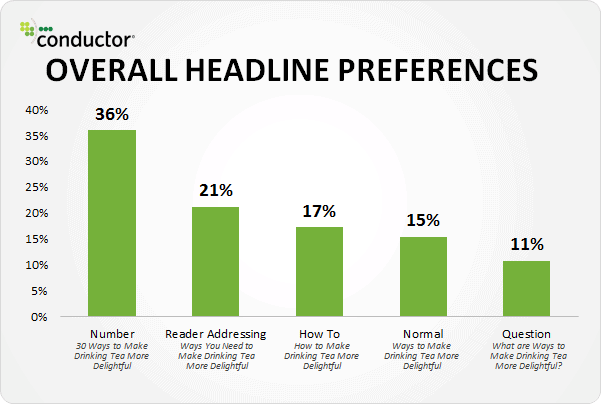 The conclusion is this: don’t “push” your readers, but instead “pull” them in with enticing headlines.