Warning! Websites For Sale On Flippa Fail To Get Return On Investment

As a blogger and the Editor of Inscribd, I am interested in the mechanics of SEO (search engine optimization) and the strategies and marketing efforts of other bloggers than generate success and a big readership.

I’ve done my fair share of research, and while a lot of what generates success is still a mystery to me, I have found patterns and established behaviors that are clear ingredients in what makes a successful blogger.

Successful and established websites for sale that are listed on auction sites such as flippa.com frequently command 6-figure prices.

A buyer may price their bids based on a return of investment after, say 12 to 24 months. But quite often, dollar signs can cloud a buyer’s judgement.

One blog in particular has been on my radar for well over a year, lifed.com

I have watched this website grow to dizzying heights, and subsequently seen traffic crash to the floor.

I have gathered information from public sources and requested an interview with the owner, who I emailed some questions. At the time of publication, I have not received a response.

The purpose of this analysis is not to target lifed.com in particular, but rather to use them an as example to discover issues relating to:

Enough data and public information is available to make a clear assessment, where this kind of information about other websites may be difficult to find.

This chart is for lifed.com. The vertical-axis is the estimated number of visitors coming from the first 20 search results per month.

This chart is backed up by independent data from Alexa.

I want to know why search engine traffic crashed so dramatically 10 months after the peak through to August 2013.

In August 2013, the search engine traffic received by lifed.com is now at the same level it was in December 2011.

1. Can we determine what was done “right” in the lead-up to the peak?

2. Can we determine a cause for the crash?

3. What lessons can we learn from this as content-creators and SEOs?

The story of lifed.com can be split right down the middle with a before and after a certain event. The website was sold on Flippa in December 2012. This event marks the peak of lifed.com’s success.

We can infer Jason brought a certain skill set that grew lifed.com while the new management had a different skill set or less motivation than the original owner, ultimately contributing to it’s downfall.

Jason runs his own media company DIGIq and obviously knows his stuff, but what of the new owner? A request for interview with Jason has not been received by publishing deadline.

Perhaps the skill set of a blog owner factors heavily in it’s success. What is that skill set?

If we put the human factor aside, let’s look at some empirical data to determine what other factors could be at play.

It’s fair to say lifed.com has held a prominent social media presence and has gained a respectable number of followers and likes. A twitter audit shows the followers to be real.

For each article published, a tweet/post is pushed to the social media accounts. Reader engagement or conversations are not the prominent activity.

Social media activity has remained unaltered throughout the peak and crash from incoming search engine traffic.

This screenshot from lifed.com analytics was provided by the seller.

We can see a big spike in website traffic in April 2012. This spike marks a milestone in the story of lifed.com as you can see traffic from that point on remained higher than the previous average and continued to grow.

What caused that big spike? It turns out a little bit of luck, a lot of hard work, and a bit of money.

Around mid-April 2012, two well-produced articles were published. Top 100 Funny Quotes and One Liners and Bucket List: 225 Things to Do Before You Die.

Compiling 100 of anything takes a fair bit of effort, so compiling a further 225 items including images took Jason and Michael (the attributed author) a lot of work. Jason said some of his articles took “hundreds, even thousands of dollars to create”.

Jason also said “I purchased a few sponsored tweets, an SEO package, and some Stumbleupon advertising.”

This is the epitome of an article going viral… and they did it twice in a row!

Effects Of A Viral Article

After the initial spike from the two viral articles, website traffic continued to grow. This growth may be attributed in part to the viral articles by retaining a percentage as returning readers or subscribers.

We also see from the SEMrush graph that search engine traffic grew exponentially in May 2012 which corresponds to the time when the viral articles were released.

SEMrush measures traffic from search engines, so any residual stumbles, likes or social media referrals are not measured. Also, direct referrers from links on other blogs/websites are not counted.

This can only mean one thing.

The viral articles were linked to, in such high numbers from external websites, that the articles got a massive SEO boost for direct-match and long-tail keywords.

Can a website’s continued growth be attributed to only two viral articles?

Jason said,
“Up until about six months ago (referring to May 2012), I was only publishing one article per week, yet I still managed to GROW to a million pageviews.”

I plotted the number of articles published per month and compared this to search engine traffic according to SEMrush (image is stretched to fit). 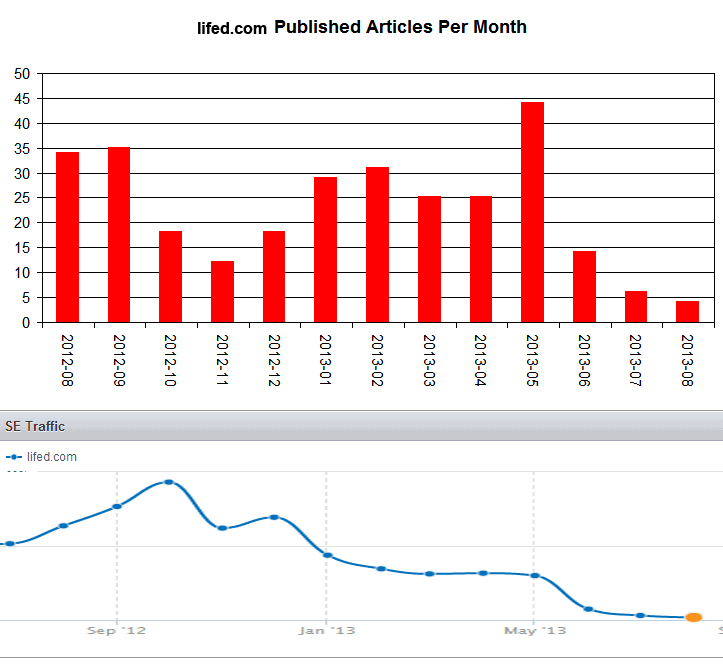 We can’t read too deeply into this data because there would be a delay between publishing an article and for it to be indexed by Google and bring in SE traffic.

So I’m not sure what to make of this, except that the new owners may have seen traffic dropping and published 44 articles in May 2013 as an attempt to counter-act the drop. It didn’t work.

Further, we can practically see the new owner giving up, with only 6 articles published in August 2013.

There are greater forces at work that are influencing traffic numbers that the sheer number of published articles cant overcome.

There is a correlation between major Google algorithm updates (known as Panda and Penguin) and changes in lifed.com’s search engine referral traffic.

This recovery in Nov 2012 is likely due to another viral article published late October 2012 22 Things Happy People Do Differently. If no articles went viral that month, traffic would have continued to drop dramatically.

On 21st Nov, Panda #22 was rolled out, followed by Panda #23 on 21st Dec where traffic is already on a downward trend.

There was a “Phantom” update where the exact nature of this update was unknown, but many sites reported significant traffic loss.

Finally, the nail in the proverbial coffin came with the big Penguin 2.0 update announced on 22 May 2013 which was rolled out during May 2013.

Is it a coincidence that traffic dropped off at the same time as Google rolled out updates?

In May 2013, Google updated their search algorithm, dubbed Penguin 2.0. A lot of websites lost their good rankings, and it seems that lifed.com may have been hit badly.

This was surely a huge kick in the guts of an already troubled site.

Here is Matt Cutts from Google’s webspam team talking about the update.

In a cruel twist, the new owner may be spewing over comments made on Flippa for the sale.

“SEO isn’t something that “wears off.” Once it’s been done to a site, a site doesn’t regress over time from it’s current rankings for no reason. Search engines may, however, implement new algorithms.”

Jason was not being deceptive with this comment, but rather that was widely held belief at the time. How could he have known Google was about to issue a series of updates that would cause such heartache?

Why Did Lifed.com Get Smashed By Google Panda?

“Sites affected by this change might not be easily recognizable as spamming without deep analysis or expertise, but the common thread is that these sites are doing much more than white hat SEO; we believe they are engaging in webspam tactics to manipulate search engine rankings.”

Some may suggest the two initial and third viral post may have collected links in such a rapid manner that a red flag was set off and Google marked lifed.com to be watched more carefully.

But Google did not penalise lifed.com for producing viral articles and it seems clear that the site was rewarded with large search engine referral traffic for a solid 6 months.

What I Think Happened

It’s my hypothesis that Google’s algorithm diminishes the value of the gained backlinks, subsequently causing the ranking of those viral articles to begin slipping after 6 months.

Upon each subsequent algorithm update, Google dulled the value of the original backlinks even further.

The effects of the viral articles faded away.

An interesting thing to note is the exponential rise in May 2012 due to effects of the viral articles, and the subsequent fall exactly 12 months later in May 2013 when the effect had worn off.

Revenue surely must have also taken a significant hit, since profit was based on CPM advertising income.

I asked some questions throughout this analysis, which I think I can answer.

1. Can we determine what was done “right” in the lead-up to the peak?

Create fantastic unique content that appeals to a wide audience. Give that content a boost on social media through promoted/paid campaigns.

“I usually don’t spend any money at all on advertising. Occasionally, when I know I’ve got a viral article on my hands, I’ll spend $20 on Stumbleupon advertising to give the article an initial push.”

2. Can we determine a cause for the crash?

– No articles from the new owners that generated as much interest, and/or no similar marketing strategies implemented in order to promote them towards going viral.

3. What lessons can we learn from this as content-creators and SEOs?

The first step is to create awesome unique content.

The second step is the promotion of that content.

Jason says “The formula, as hard as people try to make it seem, is quite simple. Create quality content, and play by Google’s rules.”

4. Perhaps the skill set of a blog owner factors heavily in it’s success. What is that skill set?

Copywriting, creativity, an eye for viral content and motivation to spend money on promotion. Jason has these skills, but the new owner has yet to demonstrate a similar skill set.

I emailed Jason Bachetta, the original owner and founding editor of lifed.com, but did not receive a response.

I emailed the current contact address at lifed.com, but did not receive a response.

Contact details on lifed.com still shows Jason Bachetta as the founding editor, even 10 months after the sale.